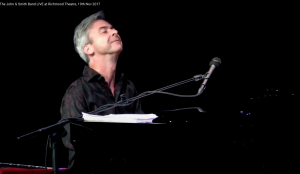 John G Smith is a pianist, music director and composer based in London. His career began as a jazz player, touring with the National Youth Jazz Orchestra, John Dankworth and Roadside Picnic, with whom he recorded many albums and performed all over Europe, including Montreux Jazz Festival and Ronnie Scott’s club. However his versatile musicianship has led him to work in many very different situations.

In the West End he is currently Associate Musical Director at both Hamilton and The Tina Turner Musical, and previously was MD for Beautiful! The Carole King Musical, Les Miserables, Bombay Dreams, Fame, Daddy Cool, The Beautiful Game and guest conductor for Starlight Express, Saturday Night Fever, Jesus Christ Superstar, The Lion King and others.

Even during the Coronavirus Lockdown he has performed, albeit to an empty Albert Hall with Katherine Jenkins on VE Day.

In 2014 John formed a band with guitarist James Graydon and bassist Zoltan Dekany (later adding the sax of Andy Panayi and drums of Dave Elliot), performing John’s own songs and arrangements.

Elaine Paige liked the band so much she asked them to be her new backing band, and to play support as well, for several tours in the UK and worldwide.

John has also scored several cartoon series for Nickelodeon, France TV1 and the Disney Channel, including Lola and Virginia, Sandra the Fairytale Detective, and Lucky Fred.